5 Months and Almost There...

We're down to one week left of the hospital floor rotations and 14 more days of school.  You have no idea how happy that makes us. 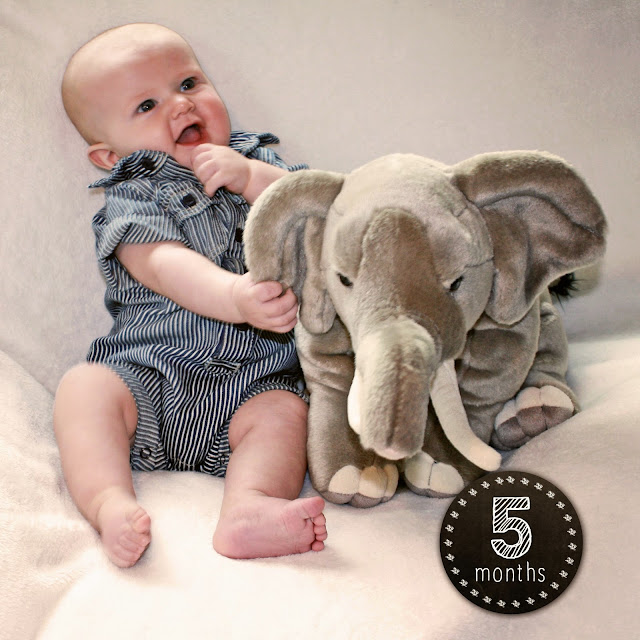 Our sweetie is 5 months old.

The past few weeks have been a little tougher.  We went from a very nice sleeper to what we think is the dreaded 4 month sleep regression.  When you combine that with teething, he's a little fussier/needy than usual at night. He also seems to like puking more than most babies I've seen. But, even with those struggles during the night, he's so happy during the day.

Nolan has quite the personality.  He's very silly, very calm, but also very persistent when he wants something. We're trying to give him a pep talk to slow down growing. I know I'm going to miss these days. He's just learning so much so fast.  I love picking him up and seeing the huge smile when he notices we're in the room.  He now can giggle, which is my favorite... though he saves them for the most special times.  He's interested in everything and insists on "standing" as often as he can.  He can now roll from back to belly and belly to back, but prefers to wow us by spinning 180 degrees when he's on the floor. He also enjoys grunting, grabbing things (especially paper towel), and the outdoors.

Other than that, I don't have much to say. May is almost done... and we're overjoyed for that.  We're eager to get into our new house (we're stepping into the new role as homeowners!), start summer, and spend more time with our sweet little canolie.

Posted by Scott and Selena at 3:07 PM 0 comments