Our sweet Isaac is 9 months today! He's been spending this month battling our first sickness, but I feel like 'tis the season.  Our Wisconsin winter got a slow start but ultimately seems to be here to stay.  Our 5-ft snowman is still going strong, adding more and more snow each week. Isaac went from some stomach bug to some nasty sinus stuff. It seems to be never ending, with his voice a little hoarse today and his eyes a bit goopy... but he smiles through it all.  You can tell it hurts a bit to eat, and he doesn't feel all that great, but that won't stop him from clapping along to excitement, scooting his way to his brother, or giggling at Peekaboo. 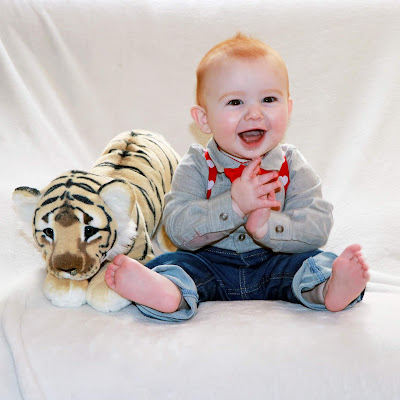 I just adore that firey alfalfa-like hair and big grin. He's very vocal.  He has to contribute to every conversation with his "Bababa" or "Dadada."  He can definitely sign 'more', and sometimes we wonder if the "Dadas" are really for Dad. They're usually pretty timely. If he's not talking excitedly, he can be found singing/grunting/whining his way to sleep.

He learned to be mobile this month, too.  I wouldn't call it crawling, but he's an effective inchworm.  He's pretty swift at moving around until he can steal someone's snack, Nolan's iPad, and/or help Nolan 'construct' whatever it is that Nolan is building. I suppose it should be mentioned that he's equally skilled at stealing ice cream and treats as they pass over his head. Spoon and all.

Feel better soon, buddy! As much as we'd like you to get back to sleeping semi-decently, we know you'd appreciate the same. <3

Posted by Scott and Selena at 5:32 PM 0 comments