I can't tell you how many times I've heard or read the saying about the many "jobs" of teachers.  And, not to "toot my own horn" but I've learned that they're very true.  We're not only teachers, but counselors, parents, nurses, etc...

However, I think we can say that about many professions (at least those who deal with people daily).  Below, Scott depicted the many different "roles" of a doctor through various sketches: a fixer, a counselor,  and an adviser, all while going home to reflect and handle whatever life brings.  (Isn't he talented?) 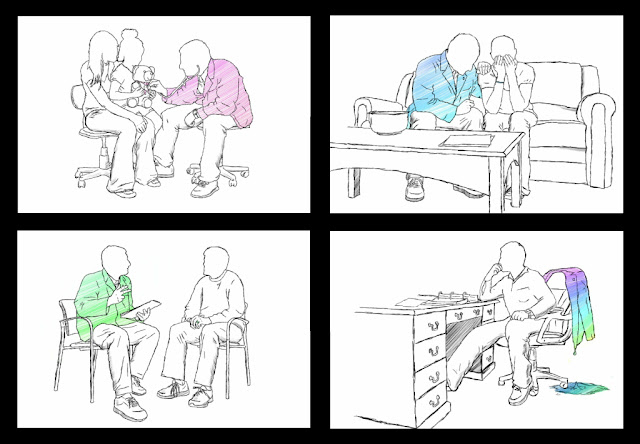 Anyway, from a more comical perspective, I would love to hear about this concept from a kid's point of view.   After being a teacher for four whole weeks now (!), I have a feeling that their job description for me would be quite a bit different.  Let me explain.. with real examples from my classroom.  (T stands for Teacher (me!) and S is for the student)

#1 Job: The Entertainer ... also known as the Billionaire.
A few weeks ago, five minutes into my math lesson, I find a note being passed around saying "I'm already bored!" Seriously, you're already bored!? I've been teaching for five minutes! Later, I pulled the instigator aside:
T: "Only five minutes into my lesson, you said you were bored.  What can I do to make it more exciting for you?"
S: "I don't know... we need like video games or something.
T: "Of course."

Posted by Scott and Selena at 6:39 PM 0 comments

Email ThisBlogThis!Share to TwitterShare to FacebookShare to Pinterest
Labels: Teaching

It has been a crazy week! I worked around 15 hours/day this week.  While the check might be helpful in the long run, my goal for this weekend involves sleep. Lots of it.  The week included getting to school by 7:30ish (at the latest), working until 4 at school, then work at the fair until 10 or 11pm.

For the past 5 years, I've been the marketing director of our local fair. Here, I design their brochures, publications, and website.  In addition, I help out wherever needed, interact with our sponsors, and dabble in various secretarial duties. It's a nice job for the summer and has very flexible hours, so it was perfect over the past summer for finding a teaching job and planning a wedding. I got pretty lucky with the job, as I didn't go to school or have any training whatsoever in website design or marketing (thank goodness for high school business partner connections).

Anyway, the fair could be said to be a "big deal." Our school even gives the students a day off for "fair day," although we teachers had professional development.  Animals and 4-H crafts tend to dominate the week for students.  I had two students gone for the entire week, and a few that were off and on.  It makes this week difficult from a teaching perspective... several students are missing an entire week's worth of learning, while the students that are there are too tired from a late night at the fair with excessive amounts of sugar. 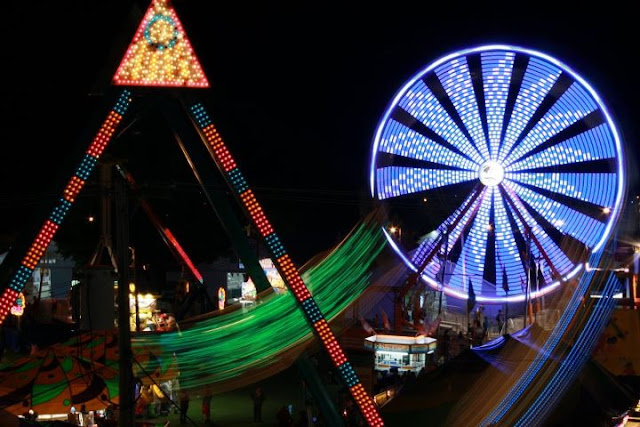 This whole post was just so I could post this Ferris Wheel picture. The Ride Company is using a new "Century Wheel" with LED lights that are pretty snazzy.  When it finally gets moving, you get pictures like these (too bad the Pirate Ship was going at the same time).

Email ThisBlogThis!Share to TwitterShare to FacebookShare to Pinterest
Labels: Fair

So, second year of med school is proving to be pretty different compared to first year.  The most obvious difference is the instructional style. You could argue you that first year was similar to undergrad with just a LOT more studying.  Scott would go to class, have live or broadcasted lectures, and come home to study.  From a girlfriend/fiancee perspective, I would only see him on the weekends and try to avoid or plan accordingly for the weekends before an exam.  For some reason, med school loves to plan exams on Mondays (as if Mondays need more depressants).

Second year has a completely different feel to it. The school has a more independent study approach.  They assign topics/cases and the students are expected to research it.  Class is less frequent (of course, the price is still the same), and the stress has increased significantly with Step I (the first part in the US Medical Licensing Exams) in less than a year.  Ask me last year, and I probably couldn't have imagined that. The exams are less frequent, which makes studying harder.  For instance, his first test had a three-week window. Without any exaggeration, the exam covered a massive amount of 700 pages of notes.  Good for them, but I don't think I could do it.

From a now wife perspective, second year is plenty different as well. Since I'm working and gone all week, I expected it to be about the same.  The hardest part is probably that his studying can't stop just because he hasn't seen me all week or that I'm finally home and free.  It hasn't been too bad so far (though not an easy adjustment).  We do make meals together and play with the kitties, but the weekend before this last exam involved a lot of random projects to keep myself busy for the rest of the time. I got the house finally cleaned, my sister's family took me to a circus, and you readers got a finished blog.  It's just a different lifestyle... that involves plenty of patience and independence.

That being said, the exam went well. We had to put off a lot of things until this coming week (simple things...like going to the store for shoes)... but there's lots of catching up to do.  It seems like med school, no matter what the year, always involves some catching up...either on studying or whatever lies outside of school. 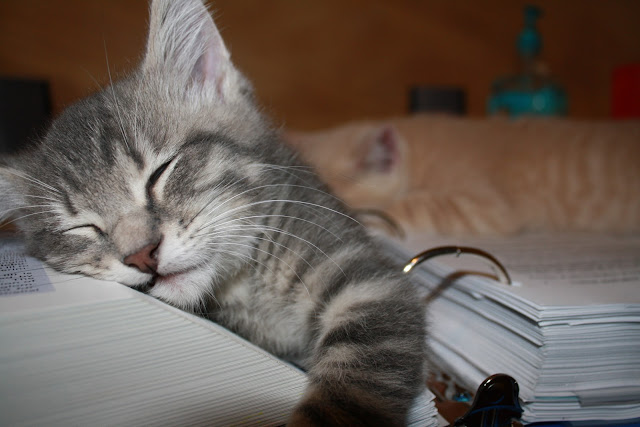 Our twins, however, don't seem to mind the studying.  In fact, they take advantage of the large books.

Posted by Scott and Selena at 5:54 PM 0 comments

I don't think I've ever actually posted my blog on facebook or any other social media site.  Therefore, after the first "official" post on the updated blog, we may have some first time viewers. For you first time viewers, below you'll find some up to date information regarding where we are right now... since some of you may have not had an update on our lives since... oh, I don't know, high school!?

I'm Selena. I'm sure you guessed that. I graduated undergrad in December of '10 and am starting up my teaching career as a fifth grade teacher.  We're only three weeks in, but I love being in the classroom with my students.  They certainly make life interesting. On the side and in the summers, I am the marketing director of the Centreville Fair.  Today is opening day, so for all you home-town residents, make your way over there.  For those of you not from the St. Joseph County area, the fair is a pretty big deal.  They even give the kids a day off from school! (Not me though... I have Professional Development) This week, I'll basically be working 18 hours/day... School, then Fair.  Busy, Busy, Busy.

He's Scott. While I (Selena), will be writing most of the posts, Scott will pop in occasionally.  In fact, up until now, he's been dominating this blog with his Rwanda experience. Let me emphasize, once again, it's a wonderful and educational read.  If you have time, start at the beginning and relive his experience.  We did have some comments on the blog, but I couldn't transfer them over on the new site. So, to all our former readers, we're sorry. :( Anyway, he's now back to med school.  He's in his second year and has gone back into "school mode," meaning I'll probably update for him.   The first question we usually get about Scott is about his career path and what type of doctor he is planning to become.  Right now, he's not sure.  Maybe Internal Medicine? Maybe something different... When he decides, we'll certainly post it on here.

While you're waiting for the next post, feel free to look at our other pages.  You'll find some more about us (pretty much what I said above), our new little family, and some wedding pictures! :)

Posted by Scott and Selena at 8:38 AM 0 comments

Welcome to the new blog site! While you're waiting for some new posts, check out Scott's blog below from Rwanda (transferred from our old site).  Happy Reading!

Posted by Scott and Selena at 5:57 PM 0 comments