... Fooled you.  You thought you we were done with our month-by-month updates, but we couldn't resist going quarterly. 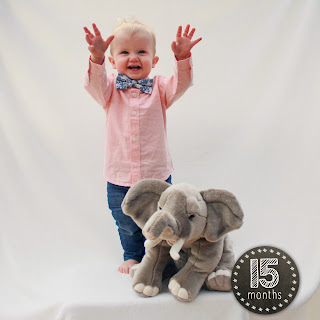 This big guy is quite the ham.  He's definitely on-the-go, all boy, and is quite the sponge.  Lately, we have noticed how much better he is at communicating and responding to commands.  Most noticeably, he created his own sign for water and brings me my shoes (and his own) when he wants to go outside.  With that, he also has learned how to throw a giant fit, complete with rolling around on the floor and stopping to see if anyone is looking at him.  He's definitely a toddler.

He's obsessed with balls and balloons.  Easy, cheap entertainment.  We also tried bubbles for the first time, but he thought dipping the wand was just as exciting as the bubbles (just as exciting as dipping ketchup, ranch, salsa, etc.).

In other news, we are eager for warm weather.  Nolan hates when he can't play outside.  Yesterday, it started to rain while we were outside.  That didn't deter him from going into the garage, maneuvering his way around to his tricycle and pulling it out to us.  He then pointed at it until we took him for a ride.  We have about 9 weeks left until summer.  Almost there!

These last few weeks are going to be tough though.  Scott is starting call again (weekends, nights, etc.), and end of the year in schools is always busy.  Never mind the 8 no-shows in conferences I have to reschedule.

Other than that, I think everything is basically the same. I need to go back to working on my spring-break goals: cleaning my house.  So far, we've successfully avoided cleaning by going to two different zoos. Nolan is going to have quite the reality check when work starts back up again.  He's been spoiled a bit too much.

Posted by Scott and Selena at 7:37 PM 0 comments