For some reason, this has been an emotional month for me.  I imagine it's all the developmental leaps Nolan has been going through, but he just seems so much less baby-like.  He's so mobile, responsive, independent, eager to communicate, ... I could go on and on.

Everything hasn't been roses.  We're starting to have to discipline the little cutie.  We're learning that he's pretty persistent.  If he wants it and we tell him no, he'll just find an alternate route.  Or, our new favorite, he'll grunt back at us. It probably doesn't help that we named him "No"lan.  Scott and I are already trying to hold back the smiles when he laughs in response to "No."  I know, I know.... I imagine it's 1,000 times worse when he begins to reason with us.

In a follow-up to a previous post, I'm happy with our choice to do Baby Led Weaning. While there were certainly some concerns and hesitation to the method, Nolan loves to eat (couldn't guess that, could you?).  He's eager to try new foods, new textures, and be involved with dinner. On the flip side, Scott and I are trying to put forth a better effort to give him healthy meals. He's great with veggies, fruits, meats, and of course, noodles!  He's also eating off the "big kid" menu at school, and his teachers have been impressed.

All the things we couldn't wait for seem to be in the present.  I can't tell you how much we love watching him learn, play, and make connections. It's so precious and goes by too fast. 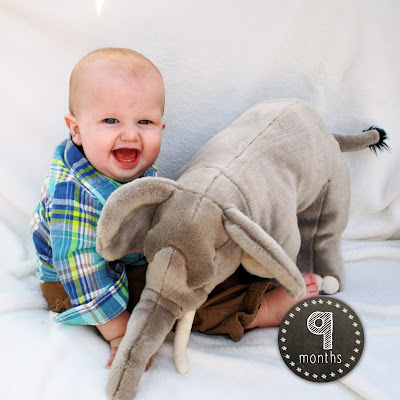 In other news, I think I'm going to let Nolan skip being a middle schooler.  Or, at least, maybe I'll go down a few grades while he goes through that stage.  They're such tough, moody things. This year, "cliques" are in full force. But, like every year, I'm enjoying teaching my students that the # symbol is not a hashtag when talking about numbers, and flooring them with subtraction problems leading to a negative number (What!?). But with that comes the harsh reality that maps are no longer necessary to students, handwriting is at an all-time low, and much of our education system is still stressing out about teacher deadlines (testing windows), and money.  I don't have a magic answer to our problems, but what we have isn't any better than what we had.  But, I'll get off my soap box for now.

Nolan, be good in school and love to learn. That's my goal for you.

Posted by Scott and Selena at 6:30 PM 0 comments