Over the summer, we had our first run-in with a wasp.  While it was a traumatic experience for Nolan, it set the stage for lots of learning about stinging insects and inspired our Halloween costumes.
*Note: the cats were supposed to be butterflies, but shipping is tough in 2020.
Meet Nolan: the beekeeper, and his bees: Isaac & Grant. 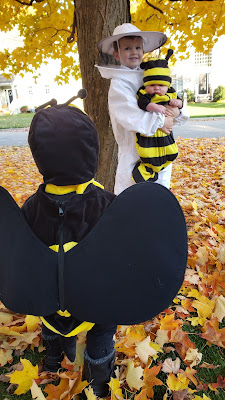 We enjoyed the beautiful weather as we strolled the neighborhood, while being able to say hi to our neighbors from the ends of driveways. I don't think we're quite ready to see bare trees and prepare for the first snow.
As always, here's our annual pumpkin carving video. We loved that the kids were so into carving this year!
https://youtu.be/ZzfvQMPCtRs

I apparently did the stack of three pumpkins three years ago.  I have no recollection of this, or am just really sleep deprived.  But, with three kids, it seemed more appropriate this year than three years ago.

Posted by Scott and Selena at 6:10 PM 0 comments

For once, I feel as though we have way too much for a blog post.  I'll break it into two posts for the night.  It looks like I need to get the baby blog going for number 3, so he doesn't feel left out when he's older.
Most importantly, while a month late, welcome to the world, Baby Grant! Grant Joseph was born on September 26th.  He was our largest baby at 8lbs 11oz, and 21inches. He's been such a sweet addition to our family.  He's a sweetheart, loves to cuddle, and is very calm.  I'm sure that will change, but for now, I appreciate his easy-going demeanor. 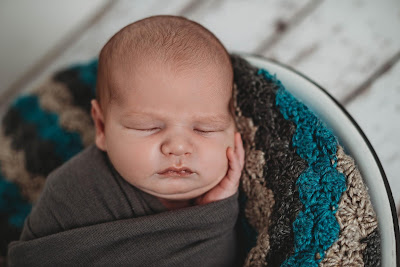 As for the big brothers, they are welcoming the new brother better than I had anticipated. Nolan has really taken to his big-brother status. He affectionally calls Grant and Isaac "his babies" and is the best at helping me get random things on the other side of the house, being an extra pair of hands and eyes, and singing/reading to them. I expected to have a big regression from Isaac, as he is pretty content laying claim to being the baby in the house. But, he's been a blast to watch take on being a big brother.  He did steal one of Grant's two pacis (that makes the score Grant: 1, Isaac: 6), but he's been okay letting him have one. He likes putting the paci back in Grant's mouth (or taking it out until we notice and then he will put it back in) and likes putting diapers in the trash.  He will do anything if it results in the cheering of "yay Isaac!" with lots of clapping. He gives him kisses and pets him nicely.  Yes, I said pet.  He also has sat on him and meowed at him... he gives equal treatment to Grant and Floyd.  He also recently enjoys running and beating me to the baby swing, where he sits and stares and smiles that he got it before the baby.  All in all, I'd say he's adapting perfectly. 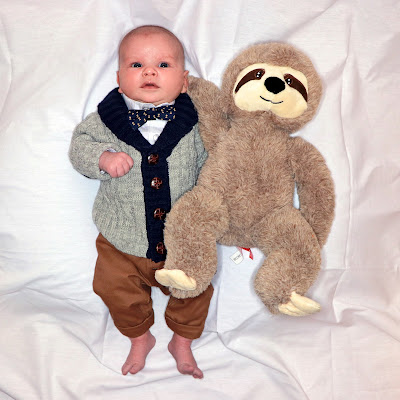 I think we're most often asked about his hair color.  While most of it is shedding, he's definitely our darkest haired kid.  It doesn't look red, or at least anywhere close to Isaac's coloring. His eyes are a dark blue.   As my family has pointed out, it seems like we have hit the Neapolitan trifecta: dirty blonde, bright red, and dark brown.  We'll see if it stays that way. 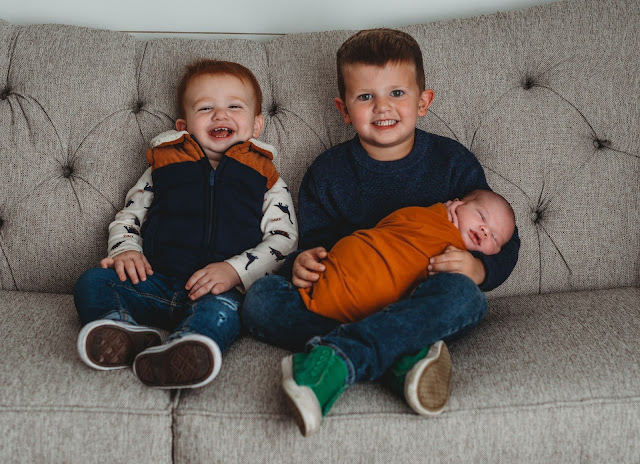 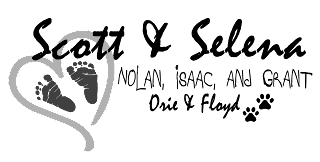 Posted by Scott and Selena at 5:56 PM 0 comments