I'm fairly late on this post.  If it makes a difference, sickness seems to have gone through the household.  I'm currently awaiting meds to be ready at the pharmacy for a sinus infection. I'm ready for some sunshine and warmth.

Our sweet little (well, not so little) Isaac is 8 (and a half) months! He's such a smiley, calm baby. We seem to have beat the worst of the reflux, though his preference is always cuddles to get through the night time.  I think back to his first few weeks and how he always needed my hand as we drove, and not much has changed.  He just loves physical touch.  He adores grabbing at Dad's beard, mom's face or necklace, and cuddling up in a little ball. He's all smiles during the day. We have quite the collection of sweet smiles from this little guy, so we picked a photo that showed off his little personality. 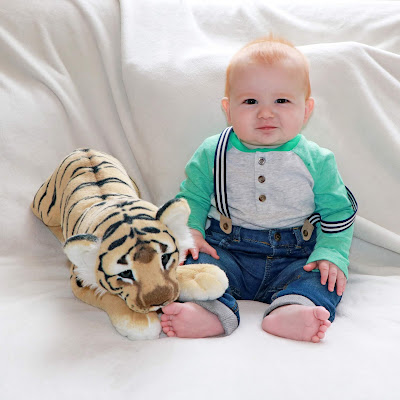 He can rock back and forth on his knees, but mostly he's still stationary. He can scoot backwards, but he's not aware that he's doing it, and it generally makes him frustrated that he's further away from what he was trying to get to.  That big ol' belly is just so heavy! He loves his kitties and his big brother.

This month was also spent pushing 6 (!) teeth through.  2 came up through the bottom fairly quickly, and then 4 all at the same time on the top.  The canines pushed through on top first, which was a little odd, but all four are there now. He's been a drool-y little trooper through it all!

In other news, Nolan's hockey pictures came back and I figured I'd share some cute ones. 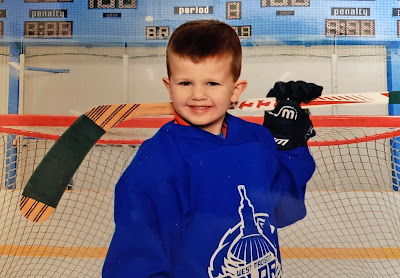 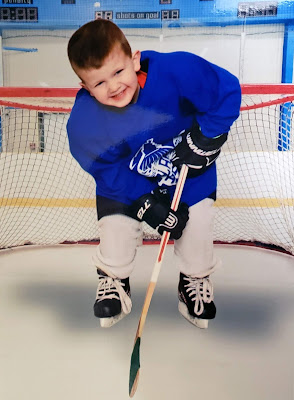 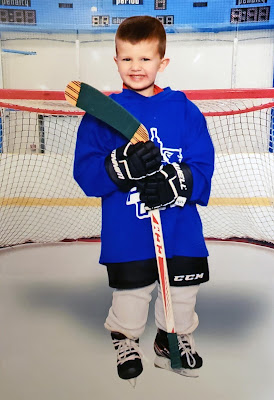 For all of you hockey fans/players, don't worry... we have since gotten him a longer stick. 😄

We also took a short mini-staycation before the sickness hit.  As always, Daddy did a good job documenting our adventures and summing them up in a short one-minute video. It's been fun to watch Nolan grow into a little water-loving fish, with Isaac following close behind. He loves the slides, and officially passed his recent swim level. He can now officially float on his back and front, swim underwater, and is starting to to take a few strokes above water.  He's getting too big!


Can you believe it's almost February!? Stay healthy!

Posted by Scott and Selena at 6:23 PM 0 comments