Doing these monthly posts can be exhausting.  I don't mind keeping the blog up to date, but I think our little stinker is done with the elephant poses.

This month was the hardest to date.  To start, he was especially sick.  If you didn't notice, we're a week late in the post.  Nolan came down with what we think is Roseola a week ago.  Scott and I each had to take a day off of work (which was difficult in itself), and we had a sick baby over the holidays.  I'll get to that in a second, but the picture taking process was plenty difficult.  The first take on the actual 11 month day was miserable.  We probably have 20 takes of him screaming in different positions while we tried to act as silly as possible.  Today's shoot went much better.  It's his first full day of having an appetite, being silly with us, etc. He was smiling/laughing with us and grinning ear to ear when he saw the cats.  The down side is that he can now move.  So he wanted to be silly on top of us, grab the cat, or crawl behind the blanket backdrop... sitting still is no longer one of our strengths.

However, a few batches of shots later, we have this cutie. 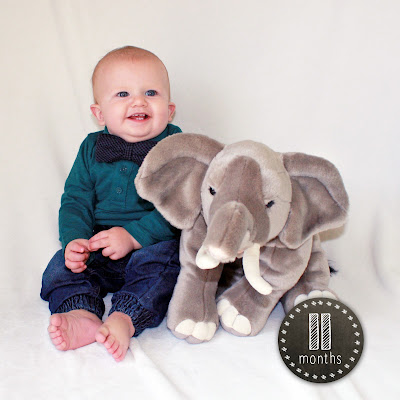 He now has a little more hair, has kept those baby blue eyes, and is slimming down quite a bit.  Now that he's healthy again, he's on the go a lot.  He can climb up and down stairs, up and down couches, and down from our bed.  On days like today, his 5:30am wake-up call was a bit too early for mom and dad... so while he played in our bed, we tried to get a few more minutes of sleep.  To keep things brief, I woke up to find that Nolan had managed to get down from our bed safely and was traveling downstairs.  He clearly was ready to play and start the day.  And, he successfully found his quiet, alone place to poop (he's very particular about this).

The holidays were nice, despite some last minute changes.  Nolan got to see his cousins, grandparents, great-grandparents, and great-great grandma. Even though he was plenty irritable, he was a trooper.  He even celebrated his first birthday a little early on one side of the family. 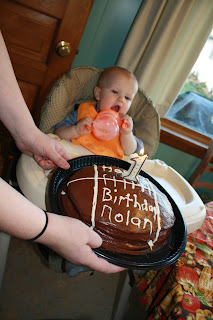 This sickness has also brought on little fits (which I think are here to stay) and his new communication tool: yelling at us.  Rather than crying when he's awake and wants us, he now just does this little "yell" to get our attention.

We're not ready to go back to work.  While we always have been thankful for the love that surrounds us, this year has been especially noteworthy.  This peanut has made us feel even more grateful to our families, friends, and those that influence us. To Scott's side of the family, thank you for the adding Nolan's birthday to the Thanksgiving mix.  We enjoyed it and love his new toys and clothes.  To Selena's side, thank you for making last minute schedule changes due to Scott getting called in to work.  While we are thankful we have a job and are always grateful to those who have to work on the holidays, we know it caused a lot of  last-minute stress.  We were sad that we didn't get to see everyone, but we look forward to catching up in a few weeks.

Posted by Scott and Selena at 6:35 PM 0 comments