As a teacher, I don't care for Halloween.  At our school, Halloween parties are supposed to last an hour, and the students must bring their costumes to change into. So, if you want them to get changed at school, you need thirty minutes just to allow students to run back and forth from the bathroom to change (with every other fifth grade class).  Needless to say, it's just a hassle.  So, I tried to ease my frustration by just watching a simple movie, allowing them to pass out candy, and I brought in my favorite fall treat: apple cider.  I couldn't believe that so many kids had never had it before.

Other teachers went crazy. Susan, if you're reading, this is for you. Black lights, scary costumes, even scarier contacts (I hate those...), spider webs everywhere, etc. Something that screams, "You're the coolest teacher ever!" ..So, in my shame of disappointing the kids, I promised to at least put a little effort into decorating Christmas.  Besides, Christmas is 10x cooler.... minus the snow.  I'm dreading winter.  I'm sure I'll post more on that later.

Anyway, as a kid, I loved Halloween.  I think I was fairly creative too... looking back I've been a genie, duck, cowgirl, TY Beanie Baby, Oompa Loompa, Cinderella, and many more that I can't remember right now.  I was always determined to never repeat a costume, and not buy one from whatever store was mass producing Halloween costumes.  In fact, all of my costumes were homemade.  Though, I'm disappointed as I go through my collection of pictures and not finding a single digital proof of any of what was said above. :(

I was excited to pass out candy this past year. I've never lived on a street that actually had houses close enough together to go Trick or Treating. I wanted to guess the costumes and see kids. Rather, I saw repeat costumes, a lack of creativity, and greedy kids.  It was very disappointing. This year, however, I'll be at school... probably.. grading papers into the night.  Scary, right?

Anyway, back to the point of the blog... Kyle, our hometown friend (and one of Scott's best men), came up here this weekend, and we participated in my favorite Halloween tradition: carving pumpkins. This year, I tried a new technique where you scrape off the skin.  It was difficult and I cut my finger, but I was proud of the result.  Kyle and Scott had great pumpkins too.

As a side note, Scott doesn't care for Halloween at all.  I was slightly appalled that he had never even carved a pumpkin.  I don't care if he doesn't like Trick or Treating, but I was determined to start this tradition with him. :)

My husband is slightly obsessed with time lapses. We're still in the beginning stages, but now you get to see us carving our super awesome pumpkins.


I completely forgot to do a kitty blog (but Scott beat me to putting pictures on facebook)... but you can see them being hilarious in the video above.

And, the final result: 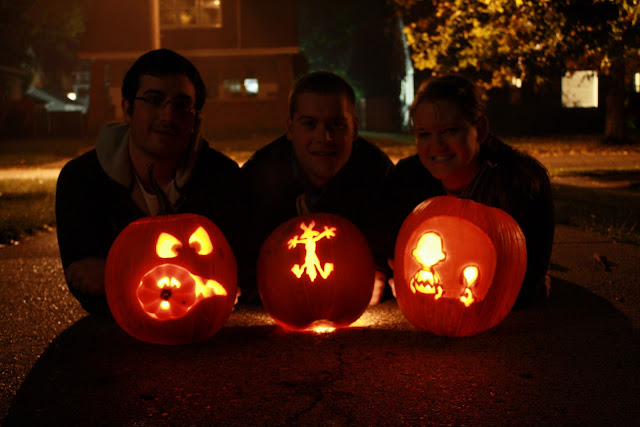 Posted by Scott and Selena at 2:40 PM 0 comments

So, Scott and I had quite the weekend planned.  I was (im)patiently awaiting for the weekend to arrive, telling my colleagues and students that I was going sky diving.  Seriously, I think we ordered these tickets last May.  I was ready for it, too. It had been a stressful week...so jumping out a plane seemed like a worthwhile investment. 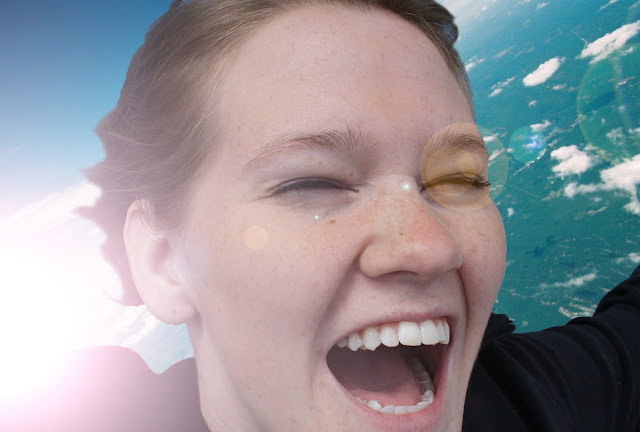 Doesn't that just look awesome!?  And, Scott, of course: 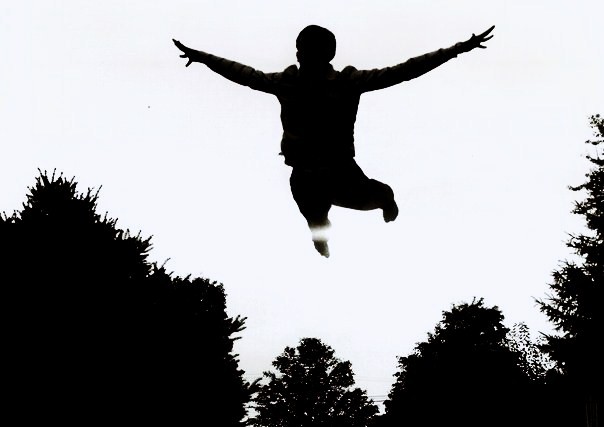 Since these pictures are definitely very different, I'm sure you can tell that our weekend went a different direction... and that was just Scott's fancy editing. 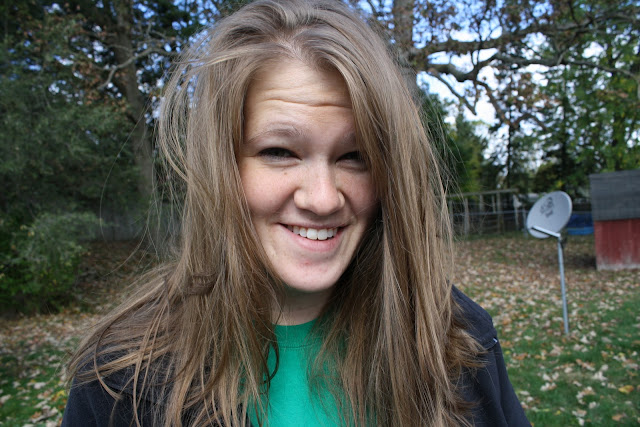 Yep, the wind got the best of us.  I think I can confidently say that Scott and I have terrible luck.  It happened to be too windy of a day, so we were grounded. I suppose it saved us a drive to Mount Pleasant, and it gave Scott a huge sigh of relief when he realized he had a whole Saturday to study (and watch those Spartans beat the Wolverines!!).   We contemplated rescheduling, but with his schedule and my realization that cold is nearer (tear...), we decided it would be best to get a refund and delay our sky-diving experiences.  It was quite sad, but maybe someday... we were so close...

I think I'll just show my students the first picture when they ask, and see who is the first person to consider that I should have had more protective gear and such when skydiving and ultimately realize the picture was fake... :)

(P.S.S. I know we need to post new kitty pictures soon... I'll try to make that the next blog.)
Posted by Scott and Selena at 1:22 PM 2 comments

Email ThisBlogThis!Share to TwitterShare to FacebookShare to Pinterest
Labels: Skydiving

It's been another long weekend of cramming, with an exam coming up tomorrow.  So, that means a weekend of finding things to occupy my time.

I was happy to have Angelina come up here for the weekend.  We went to an apple orchard, where we went to a corn maze, on a hayride, and had my favorite... donuts and cider. :)  Here are a couple of pictures.
Ha, Keagan clearly didn't understand why Malea was crouching down.


I tried cheating...and even that was hard.  Okay, so I lived in farm-country for almost 15 years...and I still don't see how you can design something like this while sitting on a tractor.

Later, Scott joined us and we met up with my other sister, Anna, and her boyfriend for dinner.  It made for a nice Saturday.

Then... to Sunday. Around 7pm, I figured I should probably do something with my day other than sitting around watching movies from our new 3 months of free HBO service, grading papers, and napping (yep...quite the exciting day).  To give myself some credit, I did go grocery shopping.  Anyway, I decided that I needed to go somewhere other than my couch.

So, I decided to somewhat attempt a run.  Now, I'm not a runner...and anyone that knows me knows that.  I secretly feel very accomplished after running a measly mile.  Anyway, I've lived in Grand Rapids for nearly 2 months, and I still have a phobia of running around in my neighborhood.  It's safe, don't get me wrong.  It's just not what I am accustomed to when running. Since I've started this whole "running" thing, I run on back roads by my parent's house, with the occasional car passing or dog being walked.  City running makes me nervous.  It's the narrow roads.  With all the parking on side streets, I get a little creeped out when a car pulls down slowly next to me, while waiting to drive down the middle of the road.  But, I faced my fears and went out for a walk/run today.  I was pleasantly surprised.  Though, I did learn a few things:
1. Grand Rapids is very, very hilly.  My parents live on "Big Hill Rd." (literally...)... and it does not compare to this. Whatsoever.
2. Country living is a lot different than city. In the country, every car that passes you waves. Any dog walker, stops and asks you how you're doing.  Cities? No.  I tried doing the whole "hello" thing to the first few people I walked past, and they just stared at me...

But, overall, it was a nice experience.  I think it's ridiculous that I faced my fears in October..when it should be cold. But, at least I know it's fine for when spring rolls around. :)

Hope you all enjoyed this gorgeous weather!

Posted by Scott and Selena at 6:20 PM 0 comments