I decorated really early (along with every other family), and I must say, it was refreshing to have a "new" space to look at for the next few months. I feel like I've been overwhelmed with all of the frustration/sadness of high COVID cases, extended (but necessary) shutdowns, positive tests of people we know, virtual learning until who knows when, etc. But, the joy of our kids' faces when they see Christmas lights, wrapped presents they're eager to open, and advent calendar surprises has made the season feel a little more normal.
I know I'm going to miss these memories that we're making when the boys are older.
Isaac, now 18 months, is such a fun guy.  He's either glaring at you for not following his plans, or unable to sit still with belly-laughs that knock him over or sheer excitement to be a part of something.   Because of the whole excited wiggle worm who was eager to watch his brother build him yet-another train track (his butt accidentally knocks them all down), you get to see the glaring Isaac. 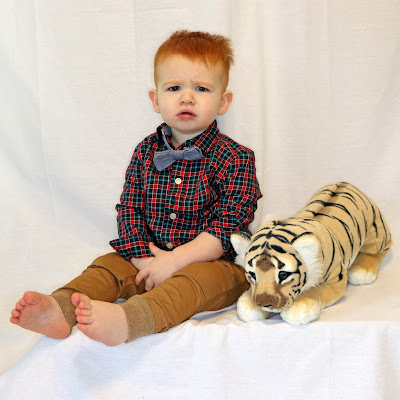 His speech is slowly coming along.  He can say a rendition of Grant, cookie, thank you, candy, snack, (sense a theme?), Baa for sheep, uh oh, and bye bye.  He's currently perfecting his nods and shakes of the head... and you get the above look if you offer him something he has shook his head "no" to. He's all personality, and I can honesty say Mom, Dad, and Nolan adore this stage (Well, Nolan's hit or miss. He appreciates his comedy at the dinner table, but not while he's building things).
Grant, on the other hand, is growing nicely. He's trying to babble as much as his older brothers do. He's easy to get to smile, and has pretty, big, dark blue eyes. He adores watching his big brothers, and is continuing to be easy-going (thank goodness). We do think he has a bit of reflux as feeding has been hard, but we're hopefully going to solve that issue soon with some meds. Luckily, Isaac was already down this road, so it seems par for the course. 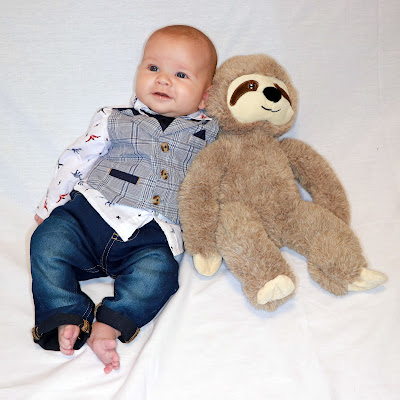 Until next time, take some moments to step back and enjoy the Christmas season. I saw a parent screaming at their kid because they saw a gift in their cart.  It made Scott and I stop and reflect on just how hard things are right now: financially, and emotionally. While I certainly miss the "quiet hours" of being able to accomplish things while Dad took them somewhere (or vice versa), their excitement seems to be just like every other year.... even if they accidentally peak at something in the cart.
Posted by Scott and Selena at 6:56 PM